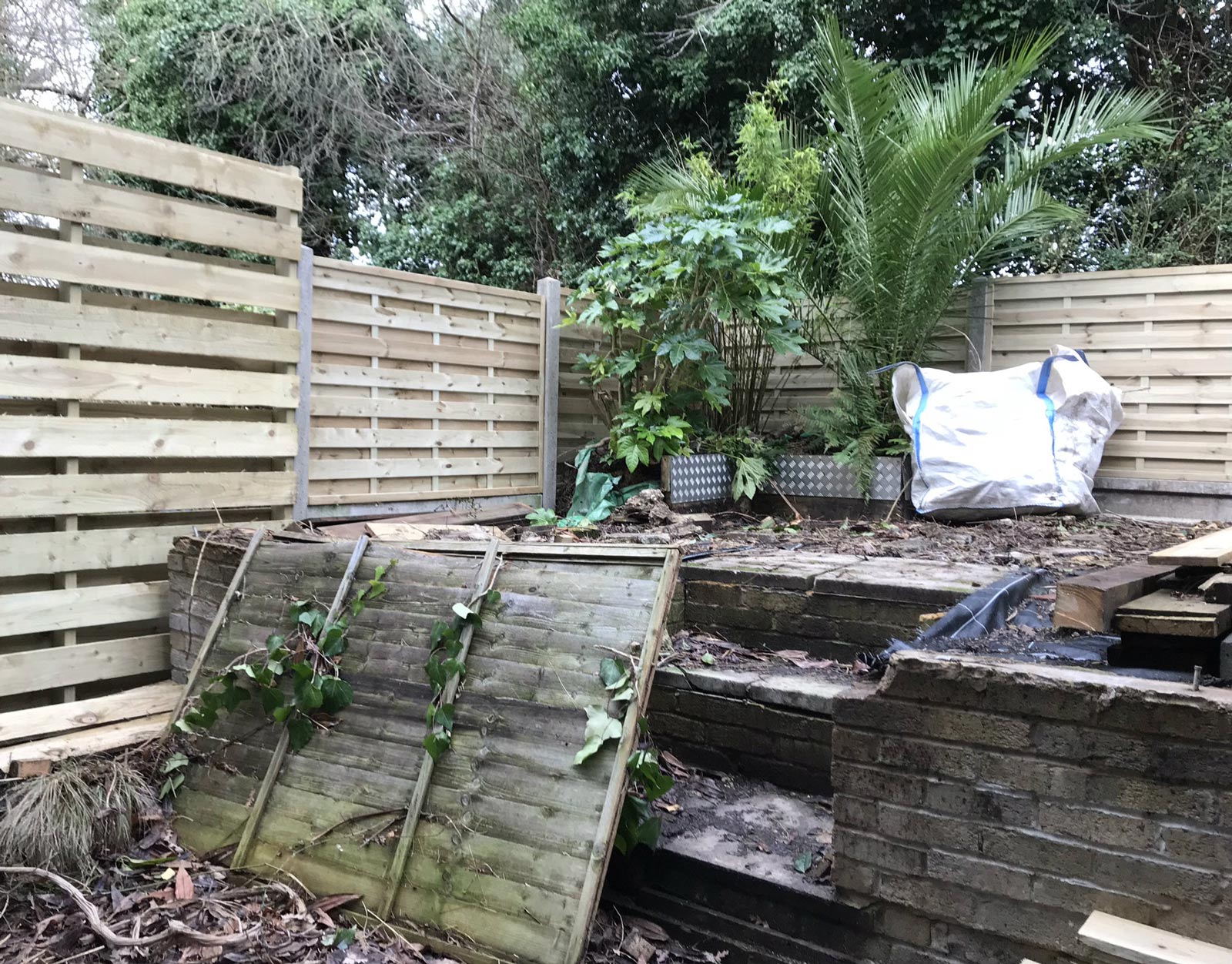 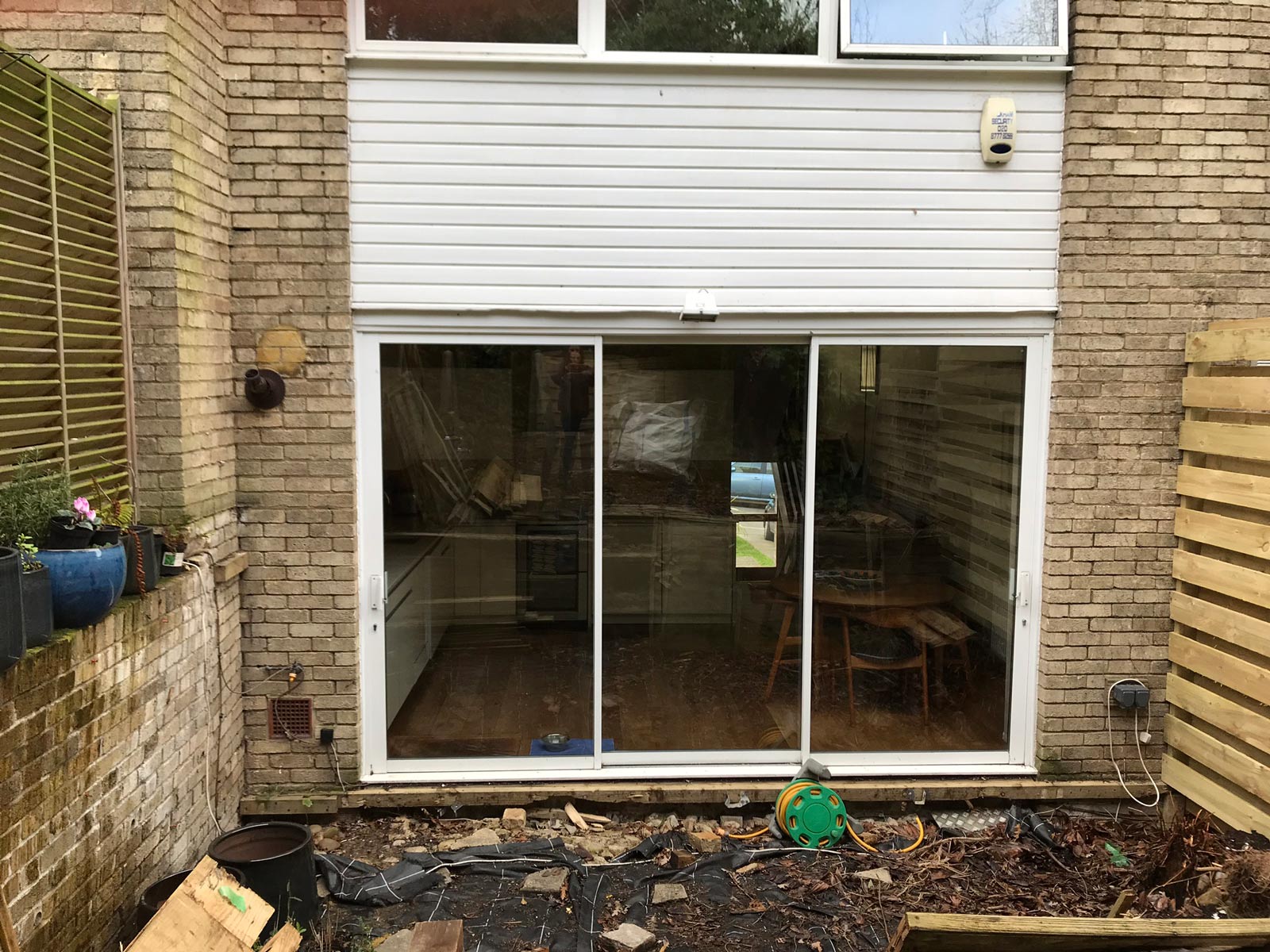 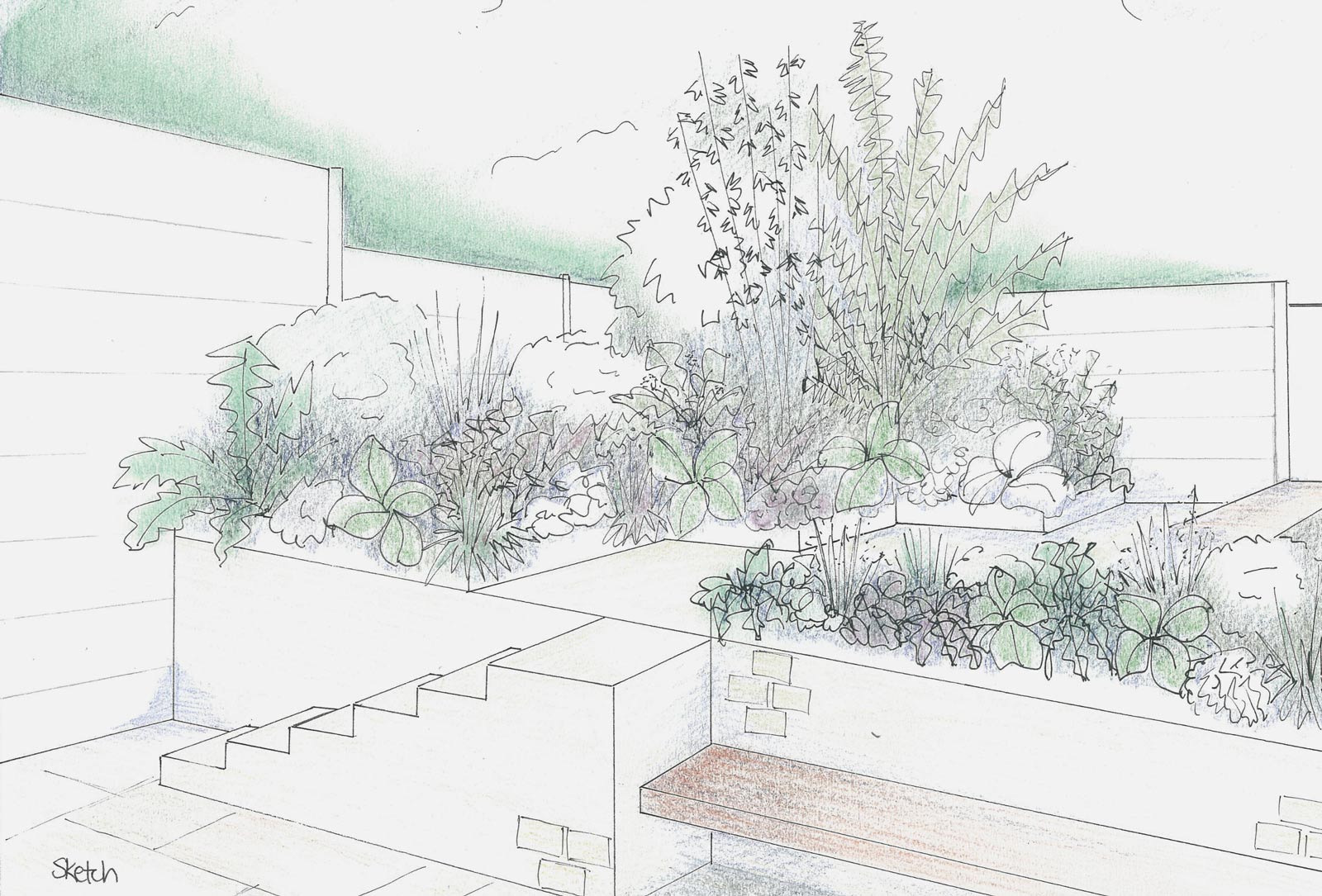 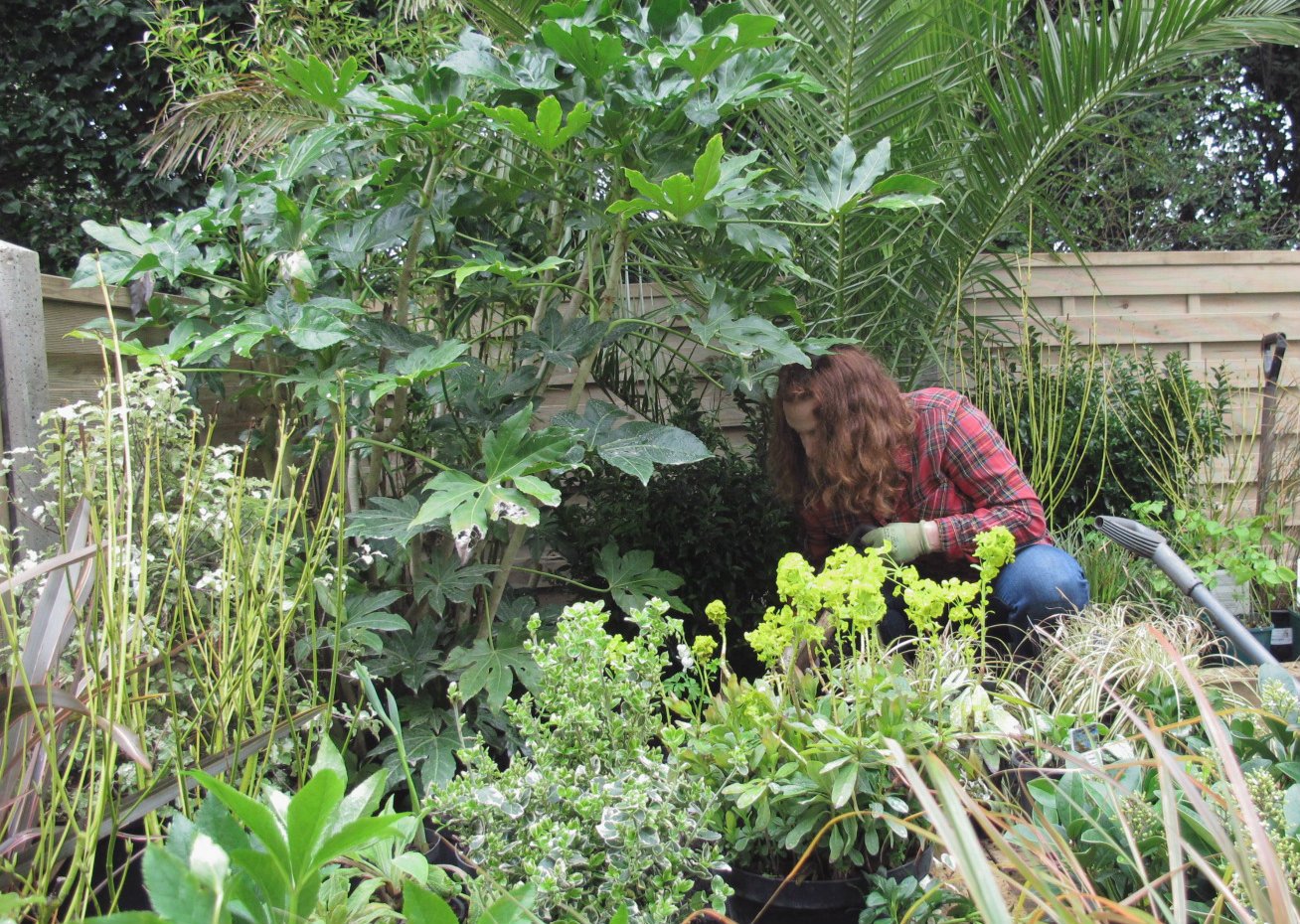 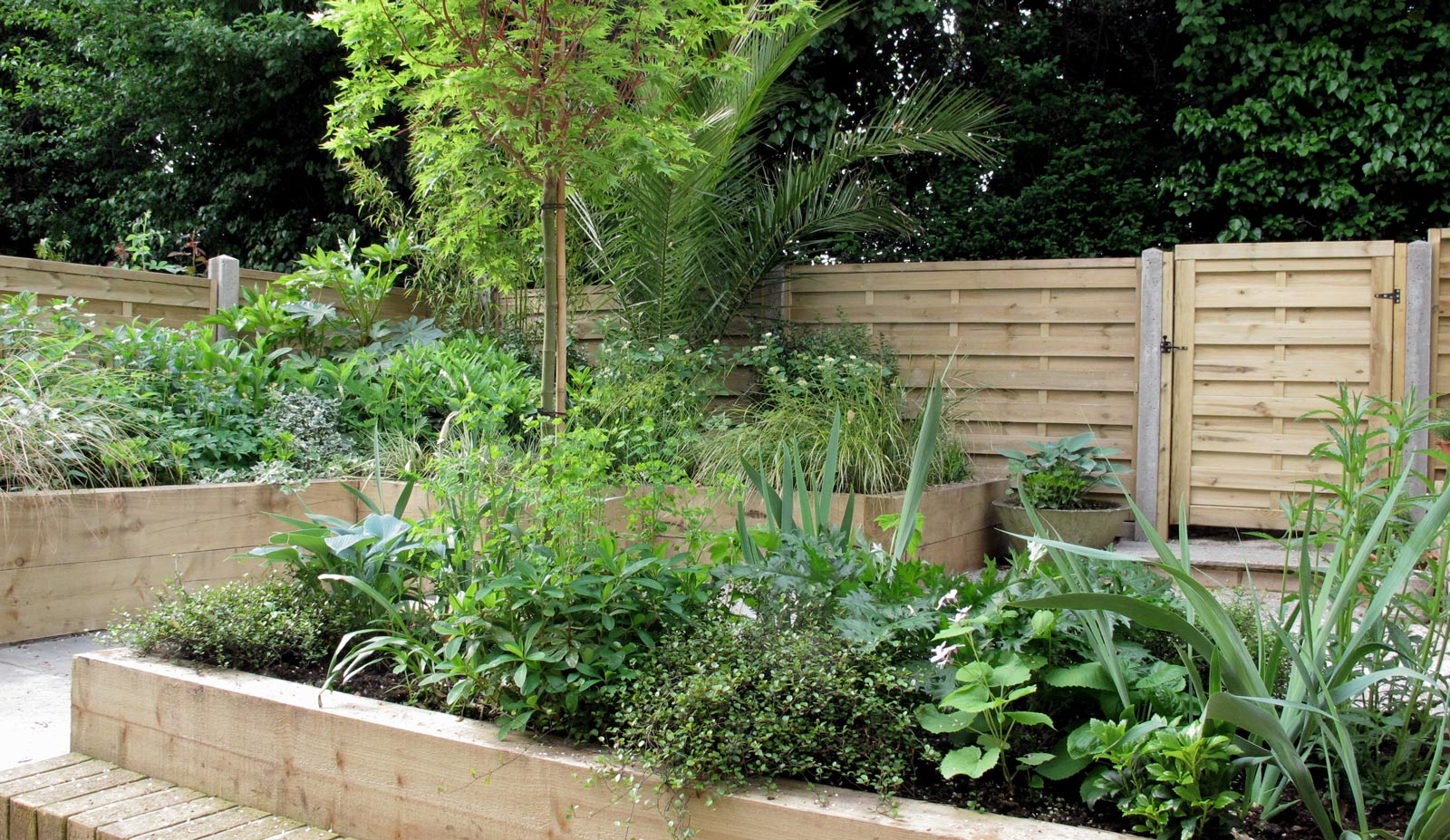 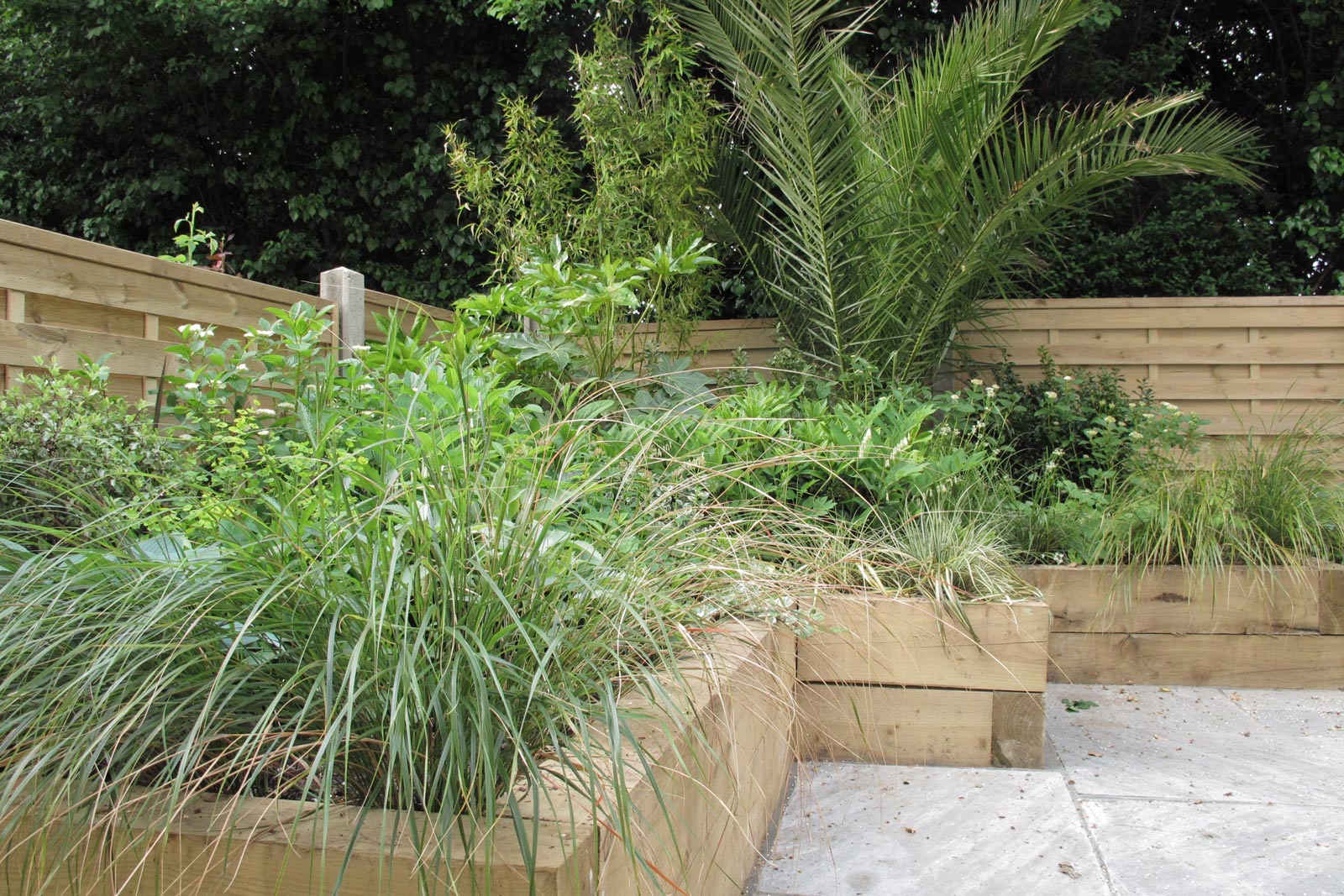 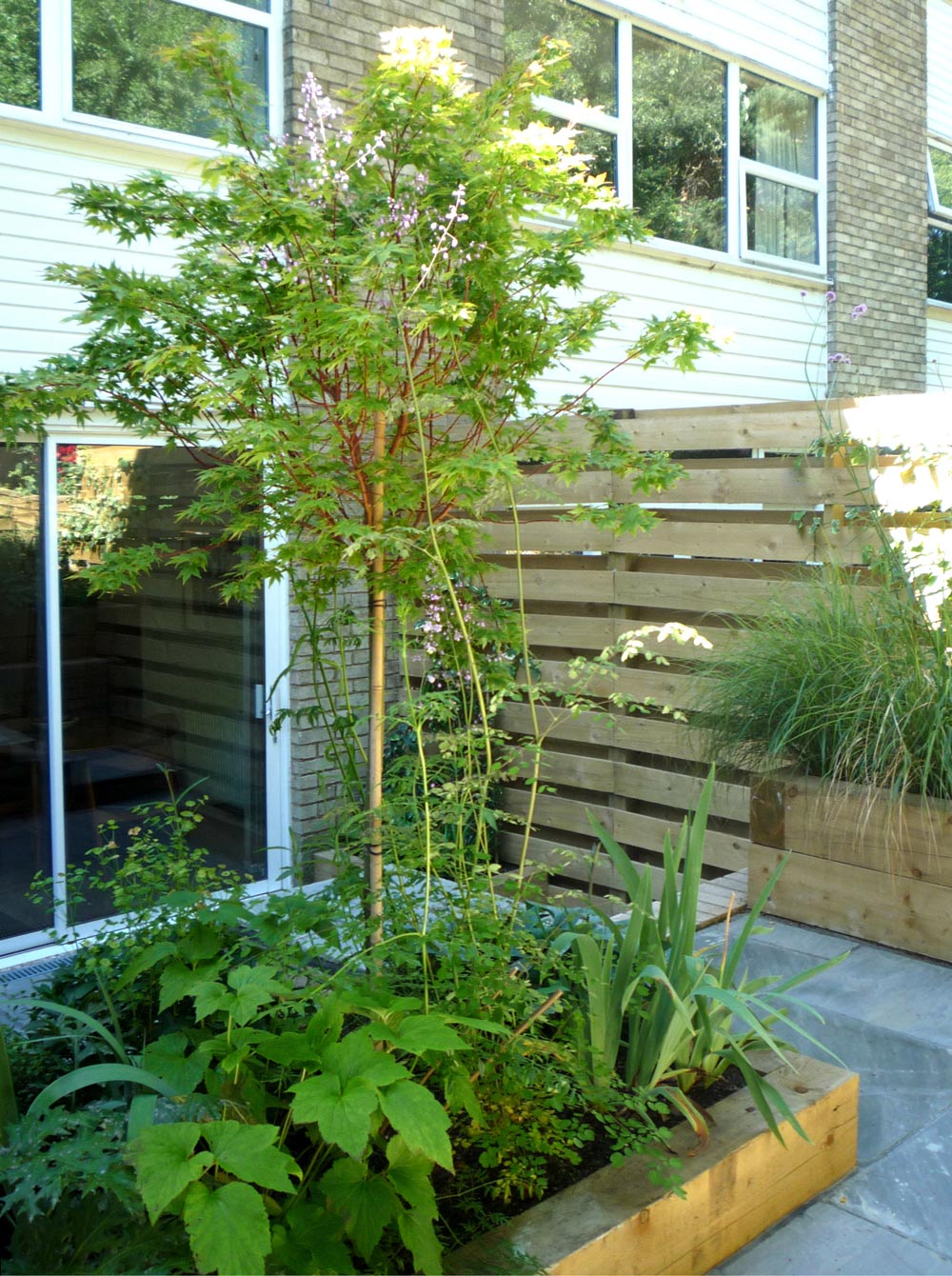 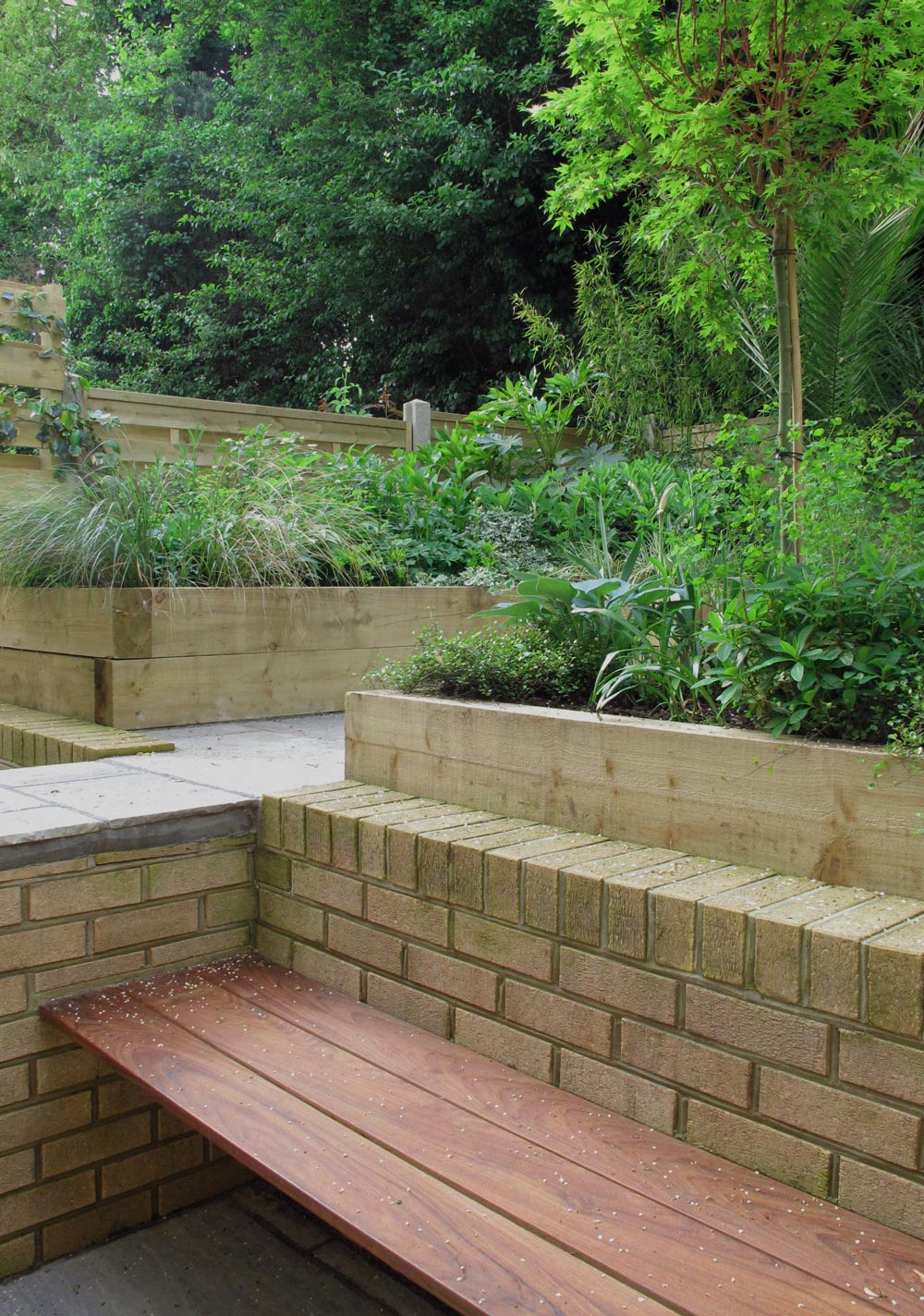 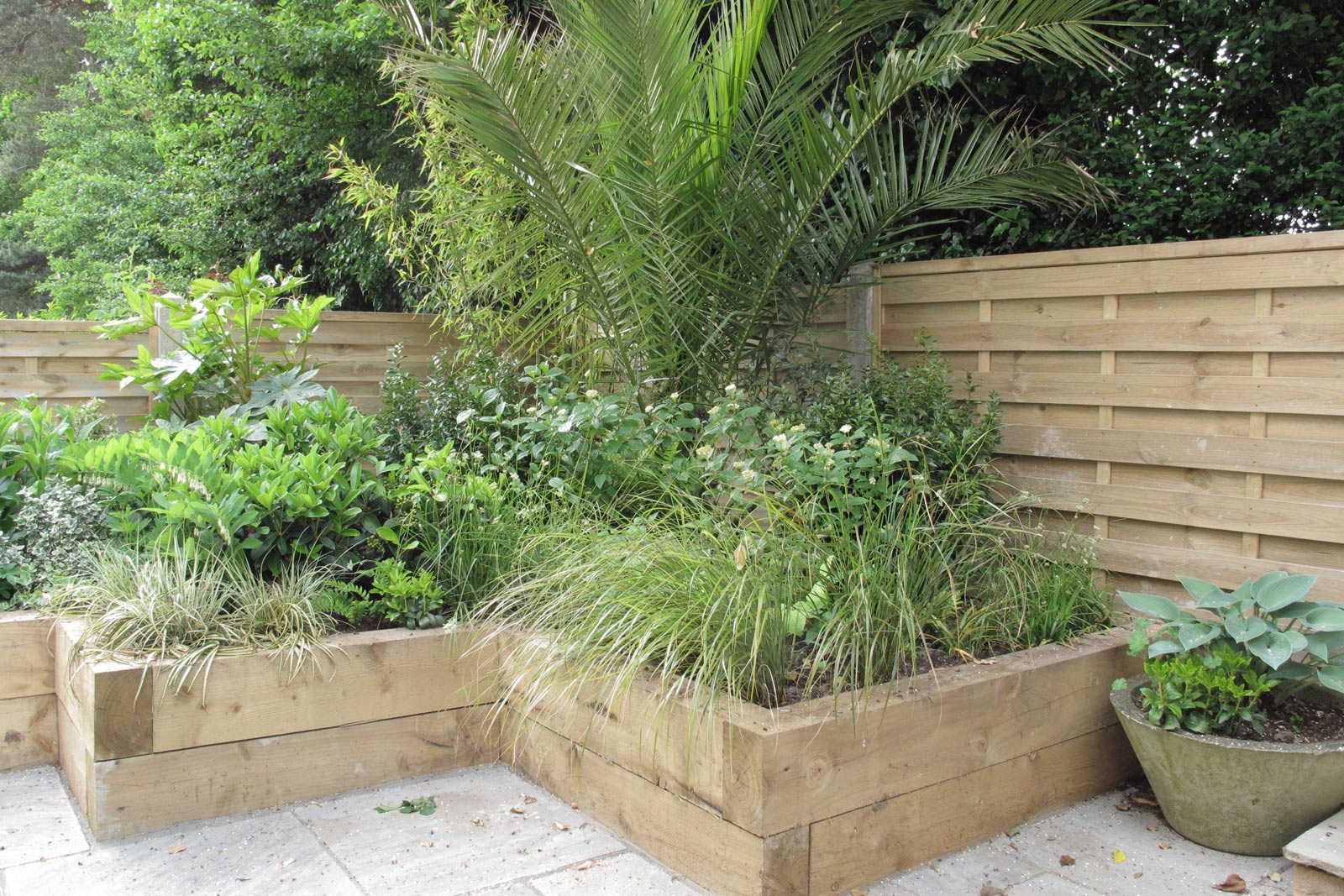 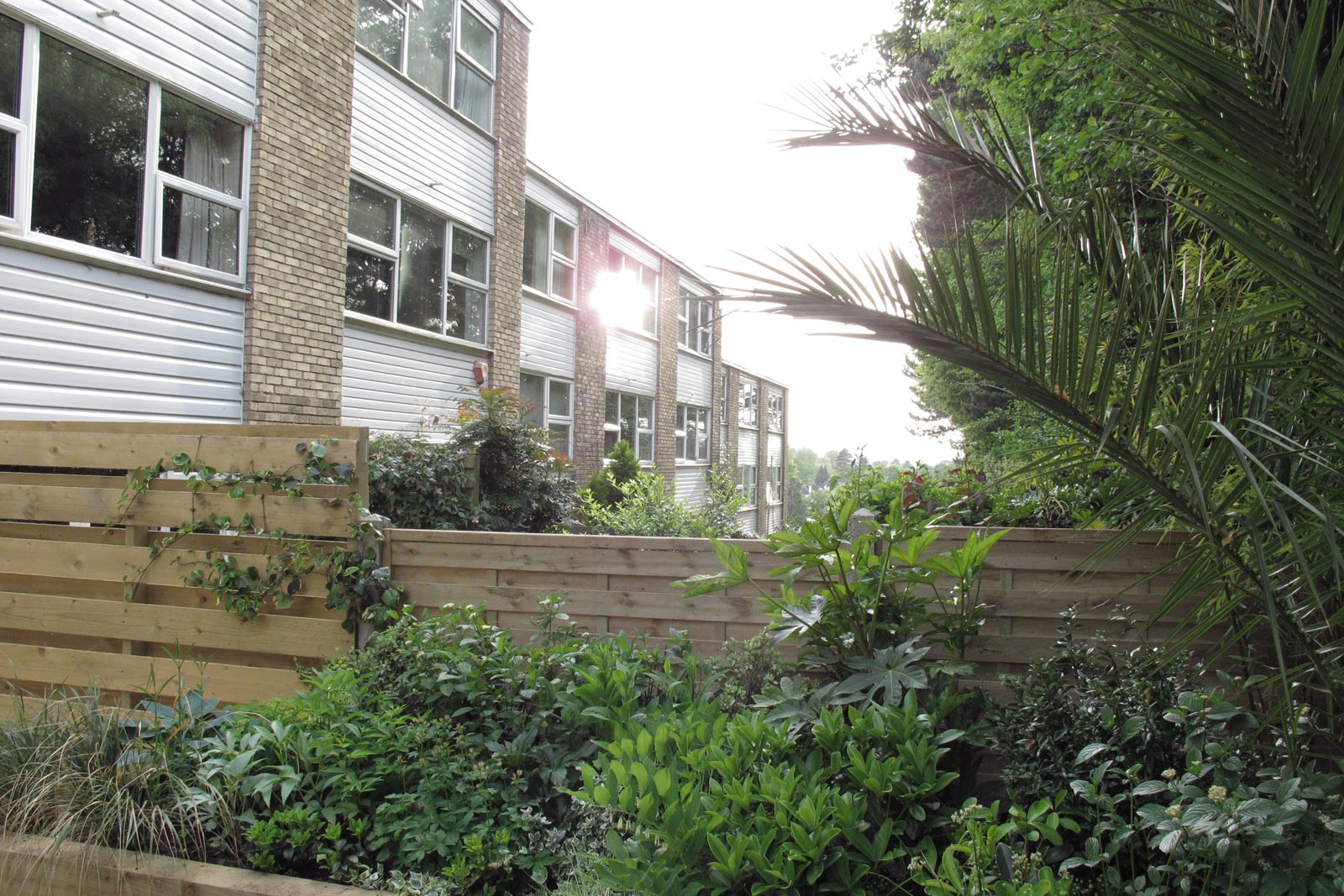 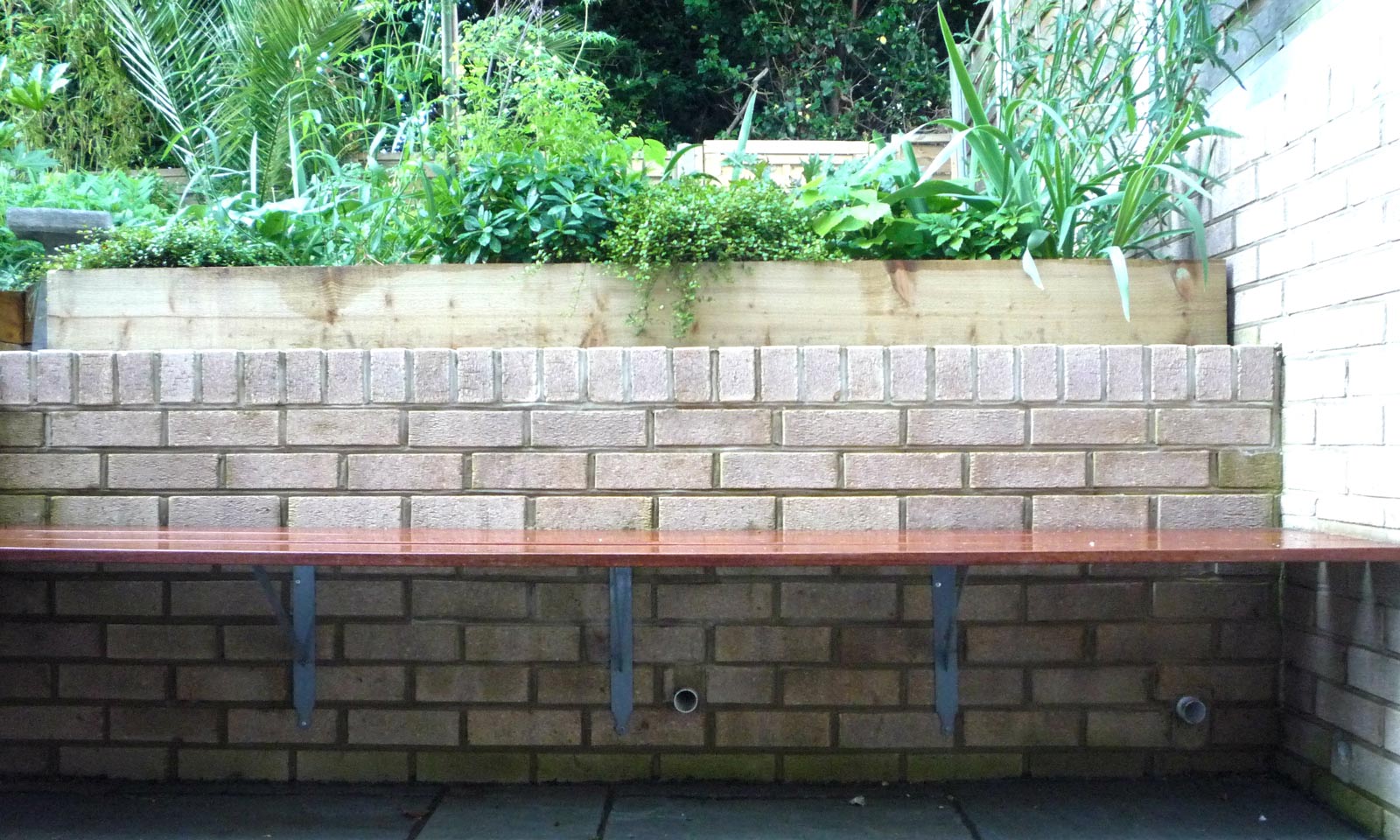 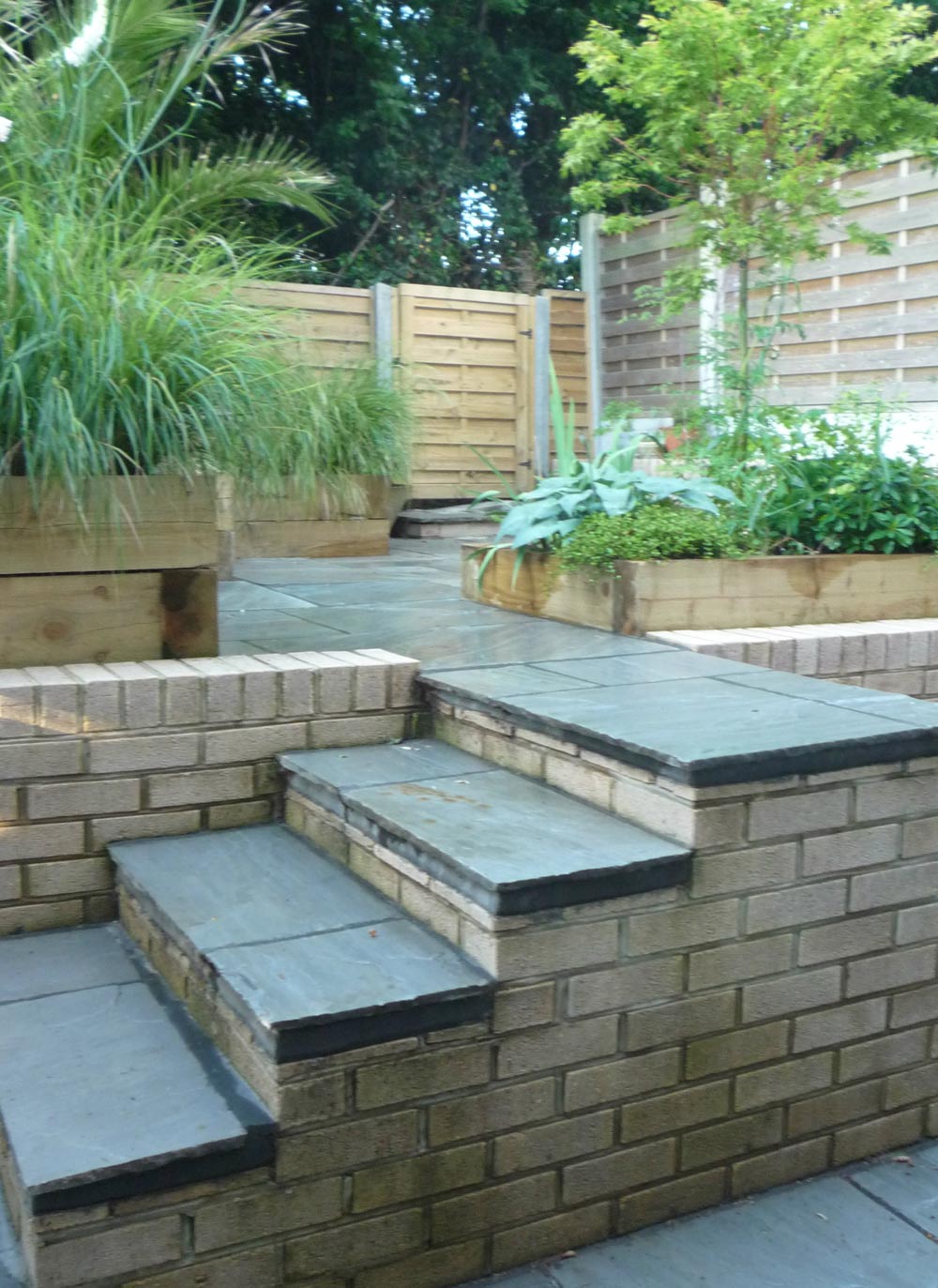 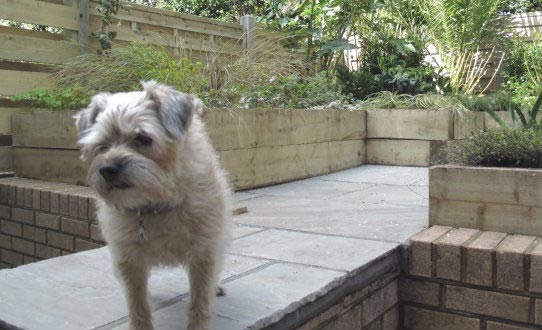 The house is a Mid-Century split level property, in Bromley, with the garden arranged over two levels. Used by a family, comprising of two adults, one friendly dog, and occasional grown-up children and their kids.

A supporting wall had failed between my client’s garden and their neighbour’s, resulting in the need for a full make-over. The wish-list, was simple; they wanted to maintain the lower section as an enclosed sheltered dining area, the previous decking was very slippy, so stone paving was requested. In the sunny part of the upper section, a paved area for a bench, as well as an all weather path to back gate for daily dog walks. More planting was to be added to the existing; palm – Phoenix canariensis, bamboo and Fatsia japonica all of which were, in one corner giving a very convenient evergreen backdrop to the new planting.

I suggested that we move the steps to the left hand side of the lower section, to best utilise the space, with the required hard-landscaping in the most shaded and therefore the least useful area of the garden. This also freed up more of the upper section for planting. As we were re-building the right hand wall and steps to the left, this allowed the addition of a built-in teak bench, maximising the seating space, whilst complimenting the design of the house. A small planter was added to the bottom left hand corner to allow climbers to cover the left hand fence. A planting scheme of pale flowers; pinks mauves and whites, as well as consideration to flowers and berries for wildlife. Once agreed we got on with replacing the broken wall, adding a new fence and increasing the planting areas, with raised beds.

The final images were taken a month after the garden was planted so early days but I think you can agree it’s an improvement, and the clients were very happy with the finished result.

We are thrilled with our new garden. It’s incredible to think it has only been planted for three months it looks well established and as it if has been here for years. Working with Carole has been a pleasure throughout. Our garden is small, on two levels, and is north-facing, so it’s not the easiest plot. But Carole has made the most of every square inch. This is partly down to her re-positioning of the steps and the clever inclusion of a built-in bench. Carole has also ensured year-round interest in the plants and we’re really looking forward to the rest of the year and seeing the garden develop.

We highly recommend Design Heights and Carole if you want a beautiful and functional garden.